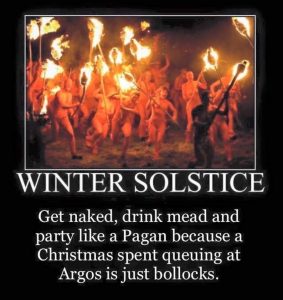 Hash Trash: To all who read these presents greetings, THIS IS HASH TRASH!!!

To all of you who showed up in usual Sembach style…I applaud you. You took a chance. A slim chance at having a great, dry , eventful evening in a shite li’l town like Erdesbach (they have KUS plates), and your gamble totally paid off. The Winter Solstice *un went off without a hitch once we finally found the goddamn On-start.

Let’s start at the beginning. We all sat there on our respective couches contemplating whether to go as if our individual absences would go unnoticed. We didn’t want to go out in the pouring rain only to be possibly accosted by Krampus in the deep dark woods. But you, and I….we all did. And now we are all better off because of it.

It did not rain on this trail. Furthermore, it was the warmest soltice evening in recent memory. We had a great (almost) full moon lighting the trail allmost the entire time. The trail was short. Finally, nobody died. JACKPOT!!!

The pack toted our Virgin, Just Lawrence, on a 2-3km sloppy mess lit by chem lights and romantic moonlight around TP’s house and ended on his porch where we were served both white & red gluhwein and cookies. Krampus made a visit and harassed some of the harriettes, I licked a belly botton (hey, a bet’s a bet) and Sensual Predator was picked on repeatedly both as the offender and as a stunt liver of Vader.

WHY: Friday is the winter solstice! Duh!

TRAIL : A – B+. Enjoy TP’s shortest trail ever on the shortest day of the year.
Distance 3-4K.

Bring: Your sexy Bellybuttons, warm clothes for later or no clothes at all, pagan clothes and any weird pagan-fu you want to bring with you; a lighting device.

Featuring: SNOW! Ok ok more likely rain… Cold — most certainly. True trail will probably have a little of the old up and down. Pretty lights of the little town of Erdesbach. Yule log, frozen boar turds, Beer stop, gluhwein stop, assorted other tomfoolery, solstice shenanigans, posh circle and a nice little on-after at Haus of Tp and BooBoo

See You there!
Teacher’s Pet
“Yes, I am an agent of Satan, but my duties are largely ceremonial”