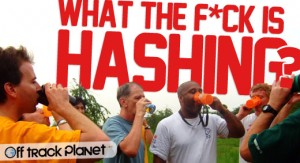 What is Hashing Video

The Hash House Harriers (abbreviated to HHH or H3, or referred to simply as hashing) is an international group of non-competitive running social clubs. An event organized by a club is known as a hash or hash run, with participants calling themselves hashers or hares, hounds, harriers, and harriets.

Hashing has not strayed far from its roots in Kuala Lumpur. The hare(s) mark their trail with paper, chalk, sawdust, or coloured flour, depending on the environment and weather.

Special marks may be used to indicate a false trail, a backtrack, a shortcut, or a turn. The most commonly used mark is a “check”, indicating that hashers will have to search in any direction to find the continuation of the trail. Trails may contain a “beer check”, where the pack stops to consume beer, water, or snacks, allowing any stragglers to catch up to the group.

Trails may pass through any sort of terrain and hashers may run through back alleyways, residential areas, city streets, forests, swamps, deep mud (“shiggy”) or shopping malls and may climb fences, ford streams, explore storm drains or scale cliffs in their pursuit of the hare.

Hashers often carry horns or whistles to communicate with each other, in addition to verbal communication. Every hash house employs its own set of trail marks and the names for these marks may vary widely, so newcomers or visitors will have the local markings explained to them before the run at a “chalk talk”. The most common term is “on-on,” shouted by runners to let others know they are on the right trail.

There are two types of trails. “live trails” are laid by hares who are given a head start, while “dead trails” are pre-laid hours or days before the hash begins. Live trails and dead trails are also known as “live hare” and “dead hare” trails, respectively. Live trails are closer to the original “hare and hound” tradition, with the intent of the pack being to catch the hare rather than making it to the end, and are more common in the United States, while the rest of the world tends toward dead trails.

A trail may be “A to A,” where the trail returns to the start, or “A to B,” where the beginning and end of the trail are widely separated. Some trails are referred to as “A to A1 (prime)”, denoting an ending point that is close to (usually short walking distance), but not the same as the start. There is also “B to A” which the participants are ferried to another location for the run back to the gathering point.

Most hash events end with a group gathering known as the “circle”, or less commonly as “religion”. Led by chapter leadership, the circle provides a time to socialize, sing drinking songs, recognize individuals, formally name members, or inform the group of pertinent news or upcoming events. Circles may be led by the chapter grandmaster, the group’s religious advisor, or by a committee. Impromptu input is welcome and/or solicited.

A “down-down” is a means of punishing, rewarding, or merely recognizing an individual for any action or behaviour according to the customs or whims of the group. Generally, the individual in question is asked to consume without pause the contents of his or her drinking vessel or risk pouring the remaining contents on his or her cranium. Individuals may be recognized for outstanding service, or for their status as a visitor or newcomer. Down-downs also serve as punishment for misdemeanours real, imagined, or blatantly made up. Such transgressions may include: failing to stop at the beer check, pointing with a finger, or the use of real names. Commonly, hashers who wear new shoes to an event can be required to drink from that shoe.

Many chapters include an ice seat or throne as part of the down-down ceremony. Those who are to consume a down-down sit on a large block of ice while they await the completion of the down-down song. If the offence that resulted in the down-down is particularly egregious, the hasher may be subjected to a long song with many verses.

In most chapters, the use of real names during an event is discouraged. Members are typically given a “hash name,” usually in deference to a particularly notorious escapade, a personality trait, or their physical appearance. In some chapters the name must be earned – that is, hashers are not named until they’ve done something outstanding, unusual, or stupid enough to warrant a name. In other chapters the process is more mechanical and hashers are named after completing a certain number of events (5-10 being the most common).

Some chapters focus on “family-friendly” names (for example: Lost My Way); others focus on names filled with innuendo (for example: Salt Lick); and some go out of their way to make the name as bawdy, offensive, or politically incorrect as possible.

Those hashers who have not been named are generally referred to as “Just (Name)”, “No Name (Name)” (e.g., “No Name John”) or “No Fucking Hash Name John” (NFHN John).

Hashers are not permitted to give themselves nicknames due to the obvious conflict of interest. Hashers who do so are often renamed by the chapter at the earliest opportunity and with a more offensive name. Similarly, hashers who do get named and don’t like their name may end up being renamed by their chapter, the members of whom may strive to give the complaining hasher an even more offensive or inappropriate name.

New hashers verbally in pursuit of an obviously offensive or inappropriate name may intentionally be given a weaker name, such as “freckles.”

The traditional symbol of hashing is the outline of a human foot, or a pair, often including the phrase “On-On”. T-shirts are a common symbol of various hash clubs, and events. A large sample is available in the Digital Hash T-shirt Museum

Hashers frequently wear specialized clothing on trail or to the closing circles. Common items include thick, knee high socks, commonly referred to as “Shiggy Socks”, kilts, or happi coats. Shiggy socks are worn to protect the shins and knees of the wearer from thorns, mud, branches, or whatever else they run through. The hash has its own tartan for their kilts. Custom happi coats, originating out of Japan, are also commonly seen and made to reflect the local kennel.